THE MAJESTIC NGORONGORO CRATER AND ITS CONSERVATION AREA

Ngorongoro Crater is an amazing place, a world heritage site located in Tanzania. It is much known for its vast plains where the big five can easily be seen in quite short time. While on Game drive, within a very short time, a wide variety of wild animals including the big five can be spotted. The crater is surrounded by very fertile grounds which is also preserved of which the famous “Masai” people live while keeping their cattle sharing the grazing place with wild animals.

At 19km wide and with a surface of 264 sq km, Ngorongoro is one of the largest unbroken calderas in the world that isn’t a lake. Its steep walls soar 400m to 610m and provide the setting for an incredible natural drama, as prey and predators graze and stalk their way around the open grasslands, swamps and acacia woodland on the crater floor. It’s such an impressive sight that, other vehicles aside; you’ll wonder whether you’ve descended into a wildlife paradise.

Its habitat is very diverse including Serengeti plains that support about 2.0 millions migratory wildlife species of the Serengeti Mara-ecosystem and  the Northern Highland Forest Reserve (NHFR) which is a the catchment forest known as ‘Entim Olturot’ in Maa language. 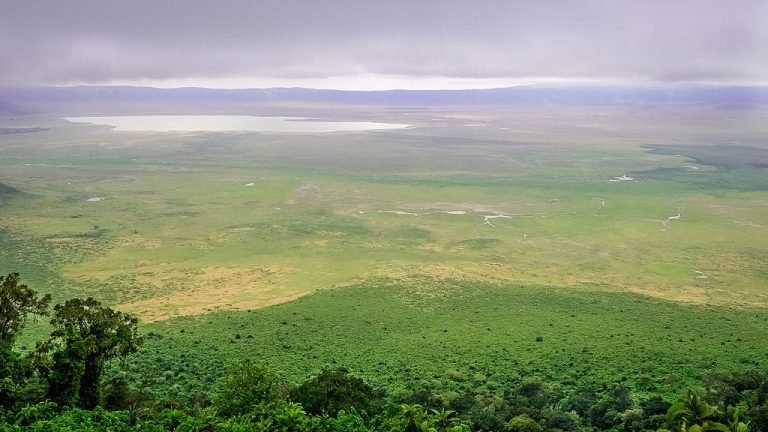 View of the Crater

There are plenty of hippos around the lovely Ngoitoktok Springs picnic site, and Lake Magadi attracts flocks of flamingos to its shallows in the rainy season. Lereal Forest (which has a less appealing picnic site, and is the starting point for the Lereal or Lerai ascent road) is good for elephants, of which there are 200 to 300 in the crater. Predators include around 600 spotted hyenas, 55 lions (at last count), and both golden and black-backed jackals.

These predators are sustained by large numbers of resident herbivores, with wildebeest, zebras, buffaloes and Grant’s gazelles the most common. Less commonly seen are elands, warthogs, hartebeests, bushbucks, waterbucks and bohor reedbucks.

Around 20% of the wildebeest and zebras migrate annually between the crater and the Serengeti. Another huge drawcard is the chance to see the critically endangered black rhino – around 30 inhabit the crater floor, and they’re most often seen between the Lereal Forest and the Lemala ascent-descent road. 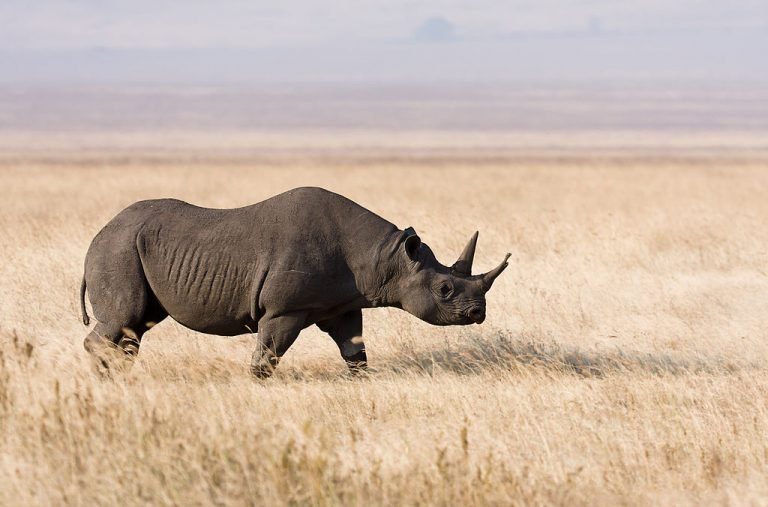 Hook-lipped (black) rhinoceros in the crater.

The reason for all this abundance is the presence of water, both from the permanent springs that sustain the swamps, and the permanent streams and rivers fed by run-off from the crater-rim forests.

The main route into the crater is the Seneto descent road, which enters the crater on its western side. To come out, use the Lerai ascent road, which starts south of Lake Magadi and leads to the rim near park headquarters. The Lemala road is on the northeastern side of the crater near Ngorongoro Sopa Lodge and is used for both ascent and descent.

The gates open at 6am and close for descent at 4pm; all vehicles must be out of the crater before 6pm. Officially, you’re only allowed to stay down in the crater for a maximum of six hours, but this is rarely enforced. Self-drivers are supposed to hire a park ranger for the crater – note that this rule is being more strictly enforced than it used to be and it’s a long way back to the park gate to hire a ranger if they don’t let you go down without one. 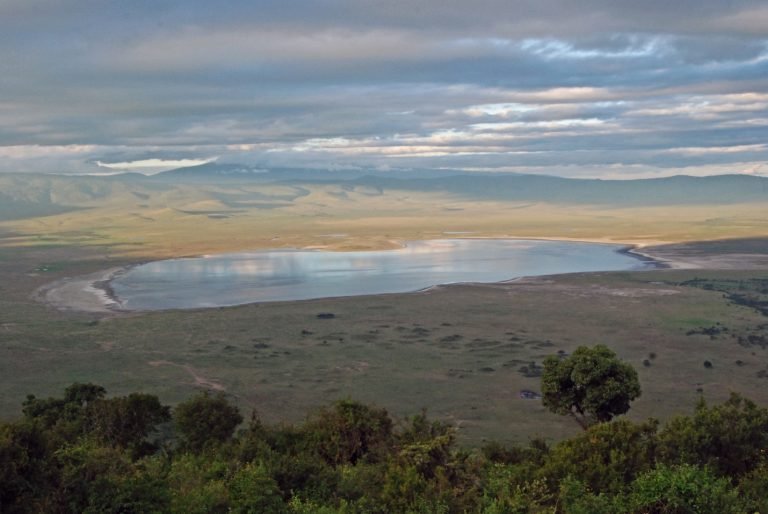 The Ngorongoro Crater is one of Africa’s most famous sites and is said to have the highest density of wildlife in Africa.  Sometimes described as an ‘eighth wonder of the world’, the Crater has achieved world renown, attracting an ever-increasing number of visitors each year.  You are unlikely to escape other vehicles here, but you are guaranteed great wildlife viewing in a genuinely mind-blowing environment.  There is nowhere else in Africa quite like Ngorongoro!

The Ngorongoro Crater is the world’s largest intact volcanic caldera.  Forming a spectacular bowl of about 265 square kilometres, with sides up to 600 metres deep; it is home to approximately 30,000 animals at any one time.  The Crater rim is over 2,200 metres high and experiences its own climate.

From this high vantage point it is possible to make out the tiny shapes of animals making their way around the crater floor far below.  Swathes of cloud hang around the rocky rim most days of the year and it’s one of the few places in Tanzania where it can get chilly at night. 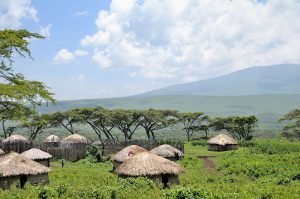 The crater floor consists of a number of different habitats that include grassland, swamps, forests and Lake Makat (Maasai for ‘salt’) – a central soda lake filled by the Munge River.  All these various environments attract wildlife to drink, wallow, graze, hide or climb.

Although animals are free to move in and out of this contained environment, the rich volcanic soil, lush forests and spring source lakes on the crater floor (combined with fairly steep crater sides) tend to incline both grazers and predators to remain throughout the year. These proud cattle herding people have a great history as warriors, and even though they are no longer allowed to build villages inside, they continue to herd their cattle into the crater to graze and drink, regardless of the predators nearby.

NGORONGORO CRATER: WILDLIFE HIGHLIGHTS
Ngorongoro Crater is one of the most likely areas in Tanzania to see the endangered Black Rhino, as a small population is thriving in this idyllic and protected environment. It is currently one of the few areas where they continue to breed in the wild. Your chances of encountering leopard here are also good, and fabulous black-maned lions.  Many flamingos are also attracted to the soda waters of Lake Magadi.

Maasai with their cattle inside the crater

NGORONGORO CRATER: MAASAI VILLAGE TRIPS
Part of the reason behind the Ngorongoro Conservation Area has been to preserve the environment for the Maasai people who were diverted from the Serengeti Plains. 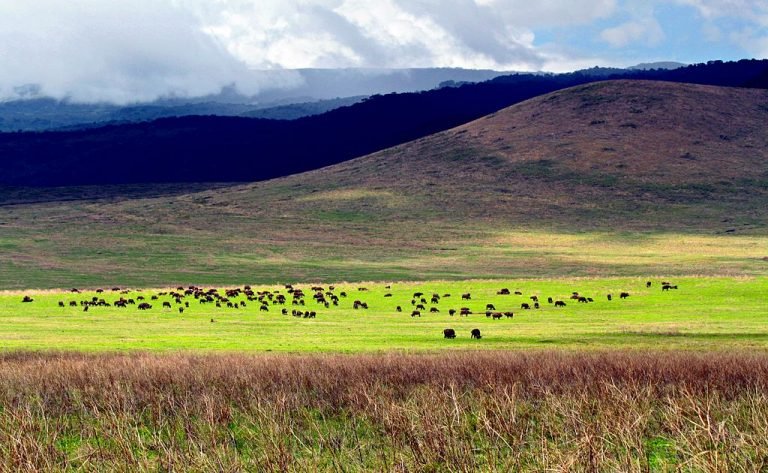 Essentially nomadic people, they build temporary villages in circular homesteads called bomas. There are possibilities to visit a couple of these now, which has been opened up for tourists to explore.  Here you can see how the huts are built in a strict pattern of order according to the chronological order of the wives, and experience what it must be like to rely on warmth and energy from a fire burning at the heart of a cattle dung dwelling with no chimney.

NCA was established in 1959 by the NCA Ordinance No 413 of 1959 as a multiple land use area, designated to promote the conservation of natural resources, safeguard the interests of NCA indigenous residents and promote tourism. 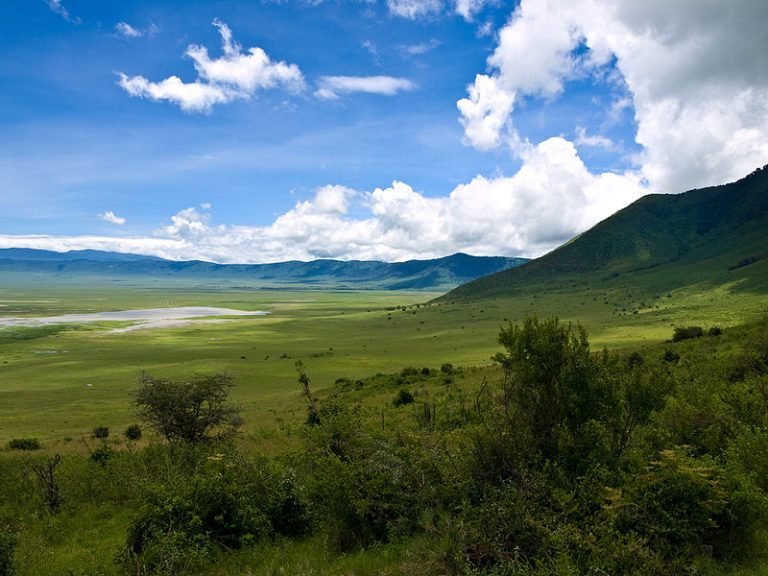 Ngorongoro from inside the crater

NCA is a unique protected area in the whole of Africa where conservation of natural resources is integrated with human development.
Reputed to be one of the wonders of the world and included in the list of Mixed World Heritage Sites in 2010, this 8,292sqkm Conservation Area named after its central feature – the Ngorongoro Crater which is about 20km wide, is the one of the world’s largest intact volcanic caldera. The 260sqkm and 600m deep crater provides an extraordinary natural sanctuary to some of Africa’s densest population of large mammals.

Other important features found in the NCA are the archaeological and paleontological site located at Oldupai Gorge which is reputable as the cradle of mankind where Hominid fossils have been found dating back to 3 million years and the early human foot-prints that were discovered at Laitole in Ngarusi area.

Because of these particular features and the harmonious co-existence between wildlife and people that has existed for many years, NCA was accorded the status of a  Mixed World Heritage Site and listed as one of the International Biosphere Reserve by the UNESCO’s Man and Biosphere Reserve Programme. Ngorongoro Conservation Area has a high archaeo-anthropological potential.  Ngorongoro Conservation Area offers a 100% sighting of the “Big Five. Most of the game viewing is done on the Ngorongoro crater floor where there is the densest population of animals.

Wildebeest and zebra in a herd inside the crater

While the Lake Magadi area and pools at the Mandusi swamp offer the best opportunity of birding in the Area. With high concentrations of wildlife offering close-range viewing opportunities, Ngorongoro is one of Tanzania’s most visited destinations. 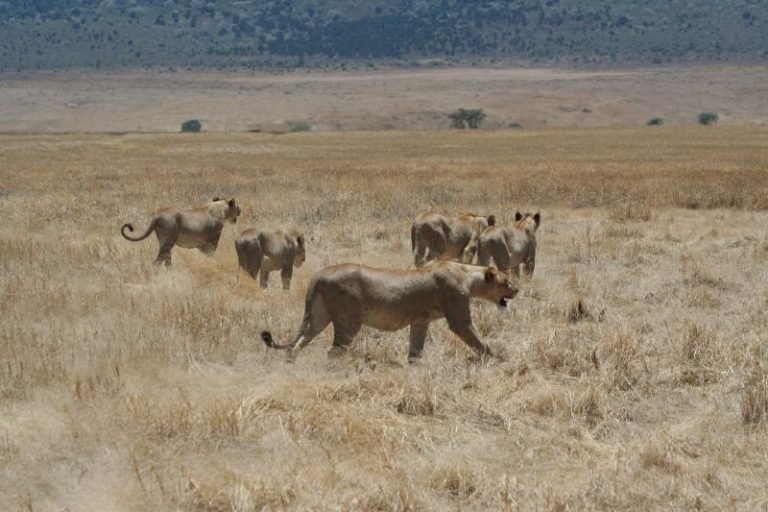 Within the walls of the crater you are likely to see lions, elephants, buffaloes and flamingos; and there’s also a chance of seeing black rhinos. Local Maasai have grazing rights and you may come across them tending their cattle. No hunting is permitted in Ngorongoro Conservation Area (NCA).