Tarangire National Park is the sixth largest national park in Tanzania, it is located in Manyara Region and is Often described as Tanzania’s most underrated national park. Tarangire is one of Africa’s little-known gems and a must for any northern circuit itinerary.

The name of the park originates from the Tarangire River that crosses the park. The Tarangire River is the primary source of fresh water for wild animals in the Tarangire Ecosystem during the annual dry season set against a backdrop of majestic baobab trees and twisted acacia, it makes for a beautiful experience.

The Tarangire Ecosystem is defined by the long-distance migration of wildebeest and zebras. During the dry season thousands of animals concentrate in Tarangire National Park from the surrounding wet-season dispersal and calving areas.

The hustle and bustle of the popular northern circuit happily bypasses Tarangire National Park, which is a delightful surprise southwest of the Serengeti (but just as extraordinary). This blissfully quiet part is virtually untouched by travellers, leaving the prime, game-dense wilderness free to be explored in peace and solitude, different to other Tanzania National Parks. The southern part of the park is especially quiet, and Oliver’s Camp and Little Oliver’s are superbly positioned if you want to get away from it all.

Boasting a variety of wildlife as diverse as its landscape, Tarangire is also the park that can boast being home to Tanzania’s largest population of African elephants. With four of the Big Five also residing within the park, it is a great spot for a day trip from Arusha or as an addition to a Serengeti/Ngorongoro centreed itinerary.

Located slightly off the main safari route, Tarangire National Park is a lovely, quiet park in Northern Tanzania. It is most famous for its elephant migration, birding and authentic safari atmosphere.  The majority of travelers to the region either miss out Tarangire altogether or venture into the park for a matter of hours – leaving swathes of Tarangire virtually untouched!

With a game viewing area that is roughly ten times the size of nearby Manyara NP and a concentration of game that is exceptional from July through to October, this seasonal Tanzania safari park is a little gem on the Northern safari circuit, especially if you love elephants!

During the dry months the concentration of animals around the Tarangire river is almost as diverse and reliable as in the Ngorongoro Crater.  However, the ecosystem here is balanced by a localised migration pattern that is followed by the majority of game that resides in and around the park. As a result, Tarangire is superb in season but questionable the rest of the year.  Elephants are the main attraction, with up to 3,000 in the park during the peak months.  Peak season also sees good numbers of wildebeest and zebra as well as giraffe, buffalo, Thompson’s gazelle, greater and lesser kudu, eland, leopard and cheetah.  The real prizes in the park are dwarf mongoose, oryx and generuk – but viewings are very rare. Tarangire is one of Tanzania’s finest birding destinations.

Tarangire safaris are the main activity, however, staying outside the park makes walking and night safari a possibility.  There are no boat safaris on the rivers here but Oliver’s Campoffers adventurous fly camping trips and very good walking safaris.  Both Oliver’s Camp and Swala have recently started night safaris within the park itself.  Ask us for more information as the regulations here seem to change every year!

Beautiful during both the wet and dry seasons, Tarangire is an excellent year round park for game viewing. Between August and October when the wildlife is at its most concentrated, the park offers particularly good wildlife viewing conditions. 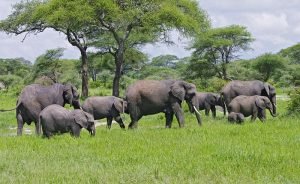 With the exception of the critically endangered black rhinoceros, Tarangire is home to all of Tanzania’s most iconic animals – from the diminutive dik-dik to the towering African elephants and giraffes that attract visitors from all around the world.

In addition to these popular animals, the park is also home to three endangered animals that can be found nowhere else in the country: the fringe-eared oryx with its graceful horns, the towering greater kudu, and the tiny Ashy Starling. 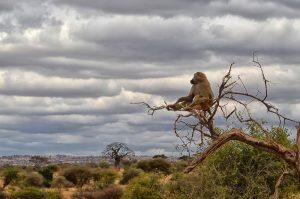 Tarangire’s claim to fame is its large elephant population – the largest in Tanzania. During the dry season, herds of up to 300 elephants can be seen digging in the apparently dry riverbed of the Tarangire River looking for underground streams.

Even during the wet season when other inhabitants of the park are able to scatter out across the entirety of the park’s 20,000 square kilometres, elephants remain a common sight thanks to their large numbers. 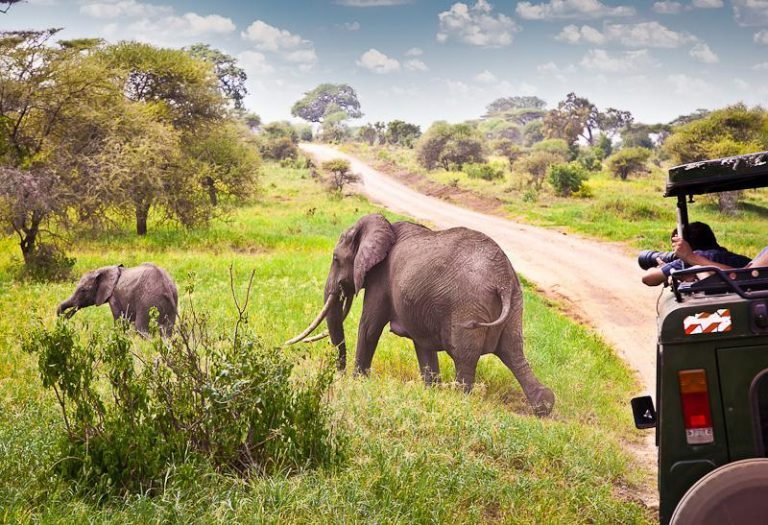 Between June and November of each year, Tarangire National Park plays host to a migration that, while not as impressive as the Serengeti’s legendary Wildebeest Migration, is nonetheless an impressive sight to see.

As other sources of water dry up, the Tarangire River becomes the park’s sole source of water and draws huge herds of wildebeest, zebras, gazelles, and hartebeests as well as the lions, leopards, and other predators who prey upon them.

During this period, Tarangire offers fascinating wildlife viewing, as its dry landscape makes it easier to spot these large groups of animals on the move. 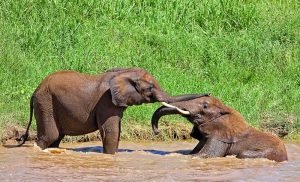 Located in the eastern and southern regions of the park, Tarangire’s swamp network offers a vital water catchment and sanctuary for the park’s elephants, cape buffalo, and more than 500 species of bird.

A seasonal swamp that dries up during the dry season, the Tarangire swampland offers intriguing game viewing opportunities for those wishing to see wallowing elephants, the Silale swamp lions, tree-climbing pythons, and even the rare African wild dog.

With its wide variety of habitats and food sources, Tarangire National Park is a popular destination for birds and the people who love to watch them. With more than 550 species of bird – the highest number on all of Tanzania – Tarangire truly is a birdwatcher’s paradise.

The park’s woodlands are home to hoopoes, hornbills, brown parrots, and the white-bellied go away bird as well as game birds such as the helmeted guinea fowl, yellow necked spurfow, and the crested francolin. 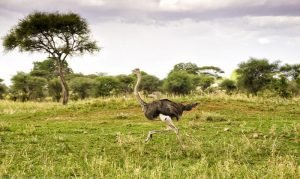 An ostrich in Tarangire plains 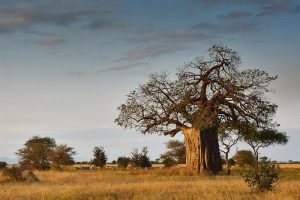 Alongside the acacia, no plant is quite so synonymous with Africa than the noble baobab. Otherwise known as the Tree of Life, the baobab gets its distinct shape from the fact it can store anywhere between 300 and 1000 litres of water within its bloated trunk. Able to live up to 600 years, this venerable trees are particularly common in Tarangire National Park. Legend has it that long ago, the baobab trees would roam across Africa on their roots until their movements angered God. He planted them upside down so that they would be forever bound to the one place.

From a more practical standpoint, the baobab is an important source of food for the animals of Tarangire, with its seeds being edible and its bark being used by elephants to sharpen their tusks.

Within the park, the notorious ‘poacher’s hide’ can be seen. This former hiding place for ivory poachers is said to have hidden up to twenty hunters at a time during the illegal trade’s heyday.

Located just outside the park, the Kolo Rocks is a proposed World Heritage site displaying ancient rock art left behind by ancient hunter-gatherers, as well as the remains of prehistoric rock shelters.